ScrapHumor is a card game which merges two datasets seamlessly and it is funny! SrcapHumor is targeted to the youth.
Most curious approach 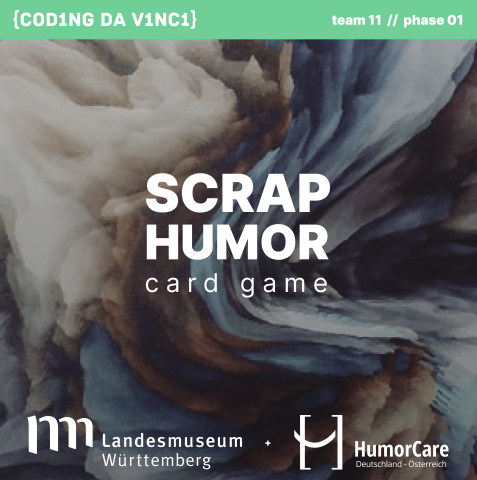 Our project is about humor and subjectiveness. It was developed based on datasets of images from Landesmuseum Württemberg and nine stories from comic writer René Schweizer provided by HumorCare e.V. Deutschland Österreich.

We took the context of their contents, that were images of scrappy objects and funny texts and based it on existing card games such as Dixit and Cards Against Humanity, to build our game mechanics. After that, we tested it with friend and made some improvements.

ScrapHumor is a turn-based card game with lots of fun mechanics, twists and turns which captures the player on the first shuffle. The game is birthed as a marriage of the two datasets with the underlying theme being the exploration of humor in different forms. It consists of text cards and image cards which follow a series of rules, draws and plays. The project is fuelled by the passion of creating a games based on the two datasets to convey humor in different media.

A valid concern of the group was how to also create a digital scenario for a game that, initially, would be printed and analog. So we had the idea of creating NFTs of the game cards and provide for the game winners a token to enable the winners to acquire these NFTs. This is the first version and we will continue to work on the project by exploring the use of the cards as Non-fungible Tokens (NFTs).