We're bringing the Herzog August Library alive in Virtual Reality. You're not allowed to touch the real book wheel there, but we want to spin it!
Everybody's darling 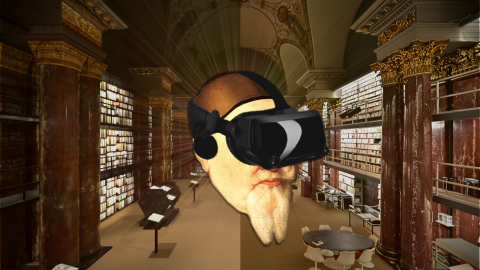 The Herzog August Library was opened in Wolfenbüttel in 1572, and is the largest collection of 17th century books in Germany with over 100.000 releases in around 35.000 volumes. With our project, we have made a small portion of this collection available in a virtual model of the August hall, focusing on interaction with rare and some extremely valuable manuscripts you would, for good reason, never be allowed to touch in reality. Contained within are the 6 book wheel catalogue volumes including an interactive book wheel, written by duke August himself as a location catalogue and accession directory. Over 10 various manuscripts from the Wolfenbüttel digital library are included as well, filled with medieval calligraphy and artful illustrations. Among these manuscripts is the once most expensive book in the world, the Gospels of Henry the Lion.

For the implementation, we used the Unity Engine, extended by the SteamVR und Lightweight Book plugin. Our goal was to develop an interaction system that utilizes the features of modern VR hardware with finger tracking, like the Valve Index, in order to make the handling as intuitive and free from commonly used abstractions as possible. In principle, our books behave as you would expect them to in reality. No buttons have to be pushed, no triggers pulled, and no joysticks moved in order to control the book. Instead, the position and extensions of the fingers is used at the time of grabbing to determine how and with which part of the book the player wants to interact.

In retrospect, we are quite happy with the result of our 14 week development cycle. However, that does not mean we are done with the project. Solutions for compromises, like the reduced page count in favor of image clarity and memory budget, or the currently only right-handed orientation for opening books and flipping pages, as well as an automated import process are already being developed.